The term amphibian (Greek: amphi = both, double; bios = life), is due to the fact that most of its species spend part of their lives in water and part on land, being the first group of vertebrates to conquer the terrestrial environment, but still depend on the aquatic environment for their developme...

The term amphibian (Greek: amphi = both, double; bios = life), is due to the fact that most of its species spend part of their lives in water and part on land, being the first group of vertebrates to conquer the terrestrial environment, but still depend on the aquatic environment for their development during the embryonic and larval phases, as to supply their physiological needs as adults. Amphibians are the most primitive terrestrial vertebrates, but are also the most evolved with a larval stage. They can be considered as one of the most interesting groups in the animal kingdom, as they present in most species an amazing metamorphosis throughout their life cycle, not seen in any other group of vertebrates.

So far, 946 amphibian species are known in Brazil. Of these, 913 are species of anurans, one species of caudata and 32 species of Gymnophionas (SEGALLA et al. 2012). For a better understanding of the biodiversity of amphibians in the state of São Paulo, the group should be subdivided into the two orders represented in this state: Anura Order (frogs, frogs and tree frogs) and Gymnophiona Order (blind snakes). Anurans correspond to the most diverse and well-known group. Gymnophiona, on the other hand, due to their cryptobiotic habits (they live in underground excavated galleries), are poorly known in all their aspects, including in relation to diversity (HADDAD 1998).

Currently, about 200 species of anuran amphibians are known in the state of São Paulo. Several studies have shown that in many ecosystems amphibians play key roles in energy flows, both in the role of predators and prey (BEEBEE 1996). Amphibians are especially susceptible to environmental changes, as their typically thin skin, free of scales and permeable, make them highly vulnerable to chemical contaminants and radiation. The way of life of many species requires the maintenance of aquatic and terrestrial habitats in satisfactory conditions (HADDAD & HÖDL 1997).

In addition, amphibians have great potential for use in the area of environmental monitoring, because their eggs are very sensitive to contaminants present in the air and water, as they lack a protective layer and are placed in or near water. Climatic factors determine the beginning, duration and intensity of the reproductive season of these animals, in such a way that careful monitoring of the breeding populations can provide an extremely sensitive test of climatic changes (BEEBEE 1996).

Amphibians, especially anurans, are true environmental sensors, which at the slightest imbalance in their habitats reduce their reproductive capacity, being able to observe the rapid disappearance of populations. They are particularly susceptible to urbanization, due to the need for water in their life cycle. One of the reasons for the sensitivity of amphibians to the health of the environment is related to their different reproductive modes, with species that deposit their eggs in an aquatic environment, in a semi-aquatic environment, with floating foam nests, in vegetation above water or even in terrestrial environment, in the forest soil (STEBBINS & COHEN 1995; JANSEN et al. 2001).

They are very important elements in ecological chains, mainly as controllers of insects and other invertebrates, being sometimes prey, sometimes predators. Overall, are good biological and environmental indicators, as they require a balanced ecosystem (through association between biotic and abiotic) to maintain its diversity. They are especially susceptible to environmental changes, as their typically smooth and permeable skin makes them highly vulnerable to chemical contaminants and radiation. In addition, the habit of many species requires the maintenance of aquatic and terrestrial habitats in satisfactory conditions (STEBBINS & COHEN 1995; BIOINDICADORES 2009).

Apparently, the vulnerability of several species is due to their high degree of endemism, which is more conspicuous for the forms of the Atlantic Forest (LYNCH 1979), as well as their specialized reproductive modes, which is more visible for the forest frogs. wet (DUELLMAN & TRUEB 1986). Currently, 36 reproductive modes are known for anurans worldwide (LUTZ 1948; DUELLMAN & TRUEB 1986; HADDAD & SAZIMA 1992; WEYGOLDT & SILVA 1992; LAWSON 1993; HADDAD & HÖDL 1997; HADDAD & POMBAL 1998).

Amphibians use sight, hearing and smell. The ears (internal and medium) of amphibians are adapted to the perception of sounds in the terrestrial environment, having evolved together with vocalization. Some have vocal cords, emitting different types of sounds (the croaking of frogs, for example), however, only males vocalize. They carry out their activities (feeding, vocalization, mating and reproduction) mainly at night. They use several different types of habitats and can have aquatic, semi-aquatic, terrestrial, arboreal and semi-arboreal habits. They are predators, feeding on land and water, mainly insects, insect larvae and invertebrates in general, such as cockroaches, ants, crickets, grasshoppers, earthworms, spiders and other frogs. In addition, they can also feed on small snakes, lizards, birds and mammals.

It is observed in this group one of the greatest diversity of reproductive strategies among vertebrates, be it in the behavior of sexual attraction, either in the types, places of laying and in the care of the offspring. Most species reproduce at night, in the hottest and rainiest months of the year, but also during the dry season, when sporadic rainfall occurs. The males attract the females by emitting vocalizations, which are specific and particular to each species, and perform the amplexo (bridal embrace performed during the laying of eggs), in which the male stimulates the female to release the mature eggs and spread the sperm over them. that will be fertilized. Spawning occurs normally on the water surface. The first phase of life is aquatic and the larva is known as tadpole. In just a few weeks, it already develops its paws, absorbs its tail and starts to breathe through the skin and lungs, like adults.

As defense structures, some amphibians have poison glands in the skin, where a wide variety of pharmacologically active substances are found, some extremely toxic and others less, but capable of producing unpleasant sensations when a predator bites an amphibian. In frogs, they focus mainly on a pair of structures called “paratoid glands”. In addition, when threatened, they can pretend to be dead (Thanatosis) to deceive their predators.

THE AMPHIBIAN FAUNA IN THE AGRICULTURAL AREAS OF SÃO FRANCISCO PLANT

Represented by typical frogs, with glands behind the eyes, they are large, robust and with many glands in the skin, giving a rough appearance and with several protuberances. They vary in size, with species from 2 to 25 cm in length. They live on the ground and have fossorial habits (they bury themselves).

Represented by tree frogs, with short heads, long legs and adhesive discs (suction cups) at the ends of the fingers, which allows them to conquer the shrub and tree environment, they are small to medium in size (1.6 to 11.5 cm in length) . It is the family with the second largest species diversity in the world.

The largest family of amphibians on the planet, together with the Leptodactylidae family, with more than 1,100 species is represented by frogs that nest with foam. They have long and robust hind legs, allowing great jumps and feet with fins. They are of variable size (1.2 to 2 cm in length).

The largest family of amphibians on the planet, with more than 1,100 species. It is represented by frogs that nest with foam. They have long and robust hind legs, allowing great jumps, and legs with fins. They are of variable size (1.2 to 25 cm in length).

Represented by small, narrow and pointed beaked frogs, they are fossorial and spend a good part of their lives under the soil or litter inside the forest, leaving only to feed or during the mating period. They are small in size (0.8 to 10 cm in length). 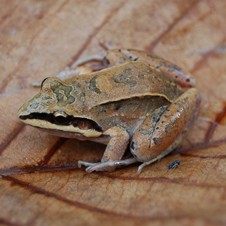 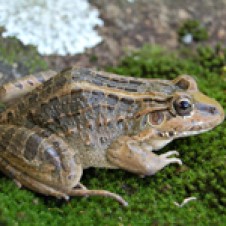 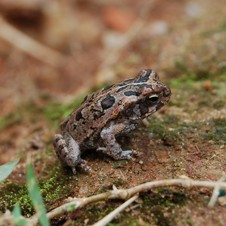 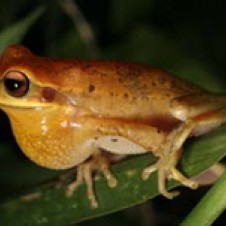 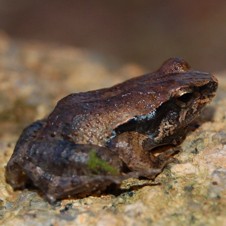 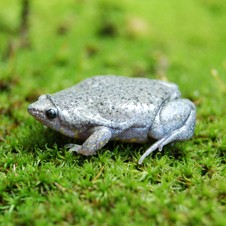 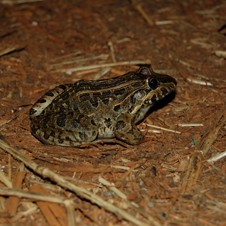 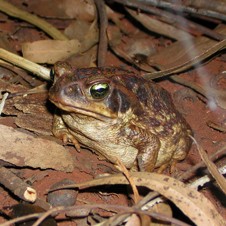 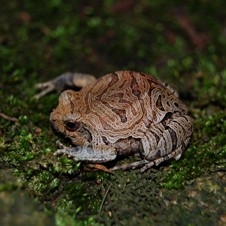 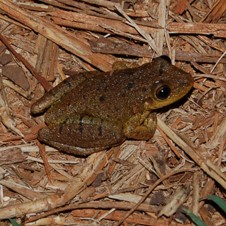 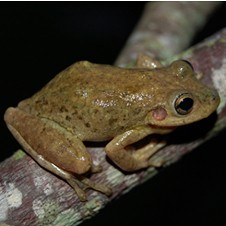 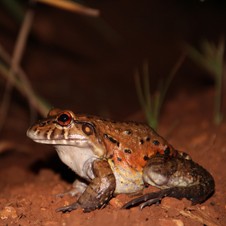 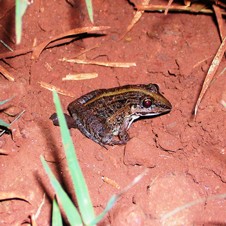 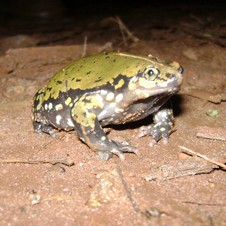 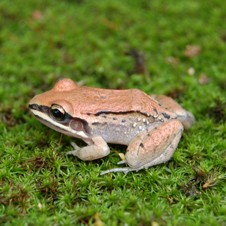 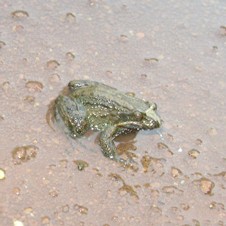 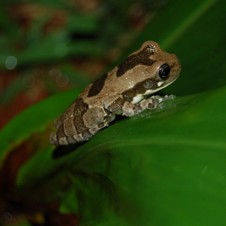 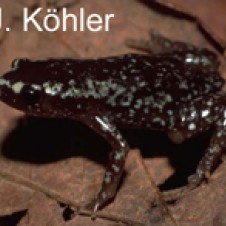 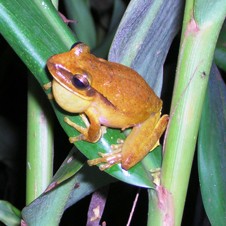 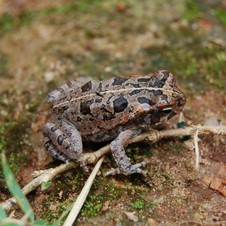